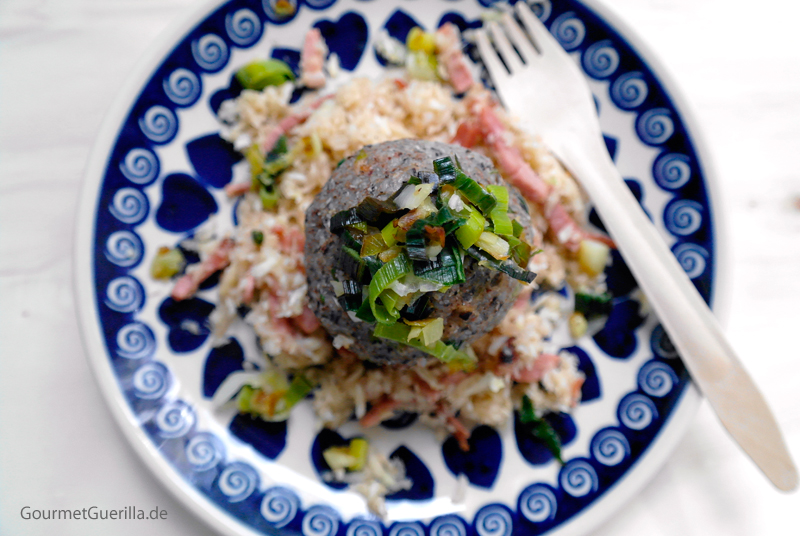 6 girls, 4 days, 1 minibus, 1 city , Tons of regional specialties and delicious wine: Our I-love South Tyrol Escape 2013 was a pressurized refueling with the most beautiful impressions of a great region. No wonder I fell in love spontaneously and left a bit of my heart in the picturesque city of Bolzano.

By the way, one thing is clear: I have to come back. Why? There are at least a dozen reasons for this.

Traditional South Tyrolean cuisine is down-to-earth and still shaped by the staple foods people used to have (even today) could produce themselves. The dishes made from flour or cereals, milk, cheese, bacon and vegetables are not capricious or complicated but enchant with their simplicity. At that time, it was mainly about getting fed up with small means. Today, this simplicity, with its good products, is enchanting.

Dumplings made from coarse black plent - that's how buckwheat is in the region - really appealed to me. They have a surprisingly nutty and savory flavor. Incidentally, the first buckwheat litter of my life swam in a home-made delicious beef broth and totally blew me away. A very simple and clear, very very delicious taste: Klos, beef broth - that was it. I could have gone on forever. Regrettably, the candidates are very filling and after two dumplings the vast majority of people are probably over. Me too. Unfortunately.

Buckwheat flour was originally more of a poor people's food. Those who could not afford the expensive, white flour resorted to buckwheat. And I, too, used buckwheat.

In my carry-on bag, on the return flight, there was (among other things) one kilo of buckwheat flour. This promptly triggered a small controversy with the security officials at Munich Airport. The Müchener are rather than strictly shrieked and I learned on another occasion before the dubious pleasure of being allowed to throw a bottle of sinfully expensive Augenmakeupentferner in a disposal bin: You have to throw away. - But that's more than half empty - that's never 50 ml! - Yeah, but the bottle itself holds 150 ml. You could fill something in! - What should I fill in there? Terrorist peephole? - If you want to fly, throw the bottle into the bin right now! - F ... ck! * piiiiieeeeep * ufhgakdjdfhasdnnnn !!!! I flew then. Without my eye make-up remover. And this time, too, I was mentally prepared for the worst.

But the good Bozen spirit seemed to work even further. What do you have in your hand luggage? Is that a candle? - No, that's one kilo of flour. - What? Please open the bag immediately! - * sigh * This is buckwheat flour. We have just come from South Tyrol and I had to take this with me. I admit, it's a bit unusual ... - But i where. You can happen. Have a good flight! Hearty people these Munich. Somehow.

And so at home I could actually try the delicious recipe with original imported flour and immediately feel completely bozen-like: The dumplings are filled with spicy mountain cheese and topped with aromatic leeks steamed in butter , The bacon salad provides a tangy counterweight to the nutty dumplings. A perfect combination! Cut 100 g stale white bread into cubes of approx. 1 cm edge length. With 300g buckwheat flour , 5 0g very finely chopped leek , 6 0g fine planed cabbage , 1 pinch of salt , 1/2 bunch chopped chives and 300 ml water to a firm dough. Cut 100 g Südtiroler Bergkäse in Wüfel with a length of approx. 2 cm. Put some dough in the palm of your hand, place a cheese cube in the middle, wrap it with the dough and make into dumplings. The size should be somewhere between a table tennis and tennis ball. Cook the dumplings in the salted water for about 20 minutes.

Leek lard
1/2 leek Wash, clean and cut into fine rings. Melt 50 g of butter in a pan and fry the leeks on low heat for about 10 minutes until lightly browned, soft and sweet.

Bacon herb salad
Slice 200g white cabbage medium-fine and place in a bowl. Slice 50 g South Tyrolean bacon (alternatively bacon or bacon) into thin strips and fry in a pan with 3 tablespoons neutral oil until browned. Season with white wine vinegar and season with 1/2 Tl ground cumin , salt and pepper . Put the hot marinade over the cabbage and mix well.

Dressing
Put some coleslaw on a plate, put a dumpling on each and top with a spoonful of leek lard. 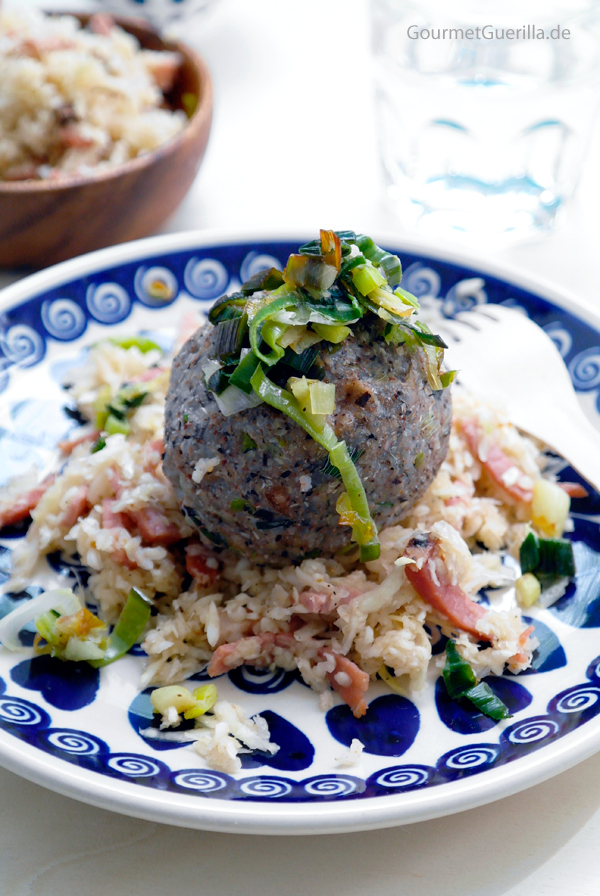 The cheese melts really appetizing Divide the dumplings. Unfortunately, I had to take a cold dumpling after the actual meal - the man and the child would not have forgiven me otherwise, you understand. 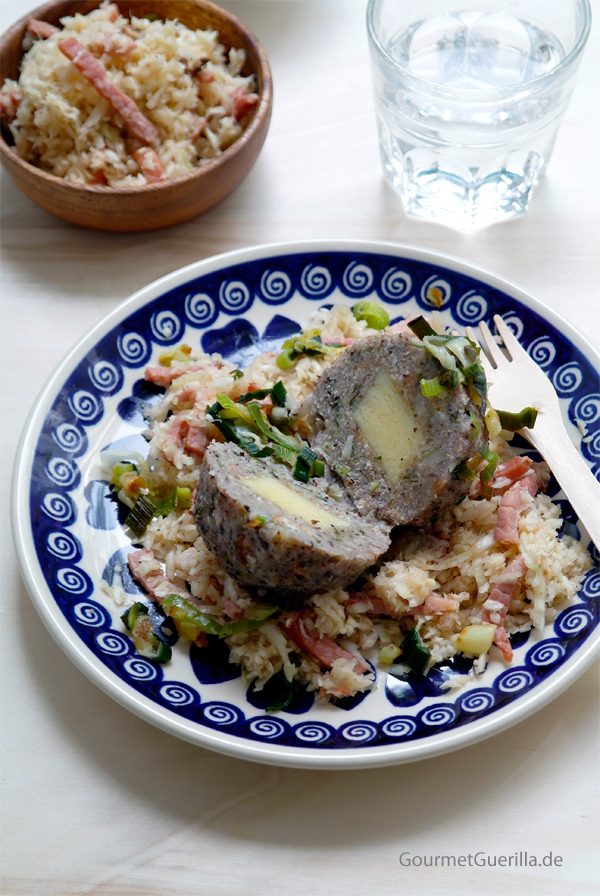 Info: Many thanks to the Tourist Board South Tyrol for the loving organization and care on site and to Florian for his everlasting hotspot (the best and strongest, of course) and his endless patience with 6 permanent-looking girls.