A plea for stuffy couple rituals and my first trip to the Jewish kitchen: Matzo Ball Soup aka matzo dumpling soup 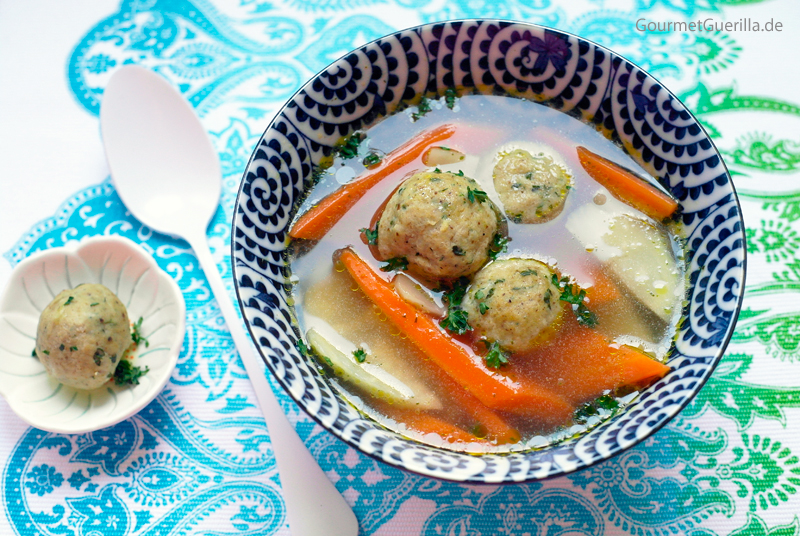 Like most couples, the man and I have developed strategies which enable us to find each other fluffy in the evenings after a 9-10 hour break with the usual spiky everyday life. In short, that means "couple rituals". One does more or less always the same to ring in. "Everything is fine here, everything as always, welcome in the nest, nobody eats up no one here, no club swinging necessary, we belong together". Is that boring, stuffy and the best way into the relationship crisis? Not at all. Please do not believe these certain women's magazines claiming that if you do not epilate it perfectly without losing time at least three times a week (this applies to both) on different kitchen appliances, the boredom and the relationship are directly pre-programmed. Better to clear the dishwasher together. For example, my first exciting outing into Jewish cuisine is, surprisingly, thanks to one of our cherished (and barely quirky) evening couple rituals in the kitchen.

When I come home after work, that's the man This is often the case when cleaning up the dishwasher. On good days, I then make a non-binding, pour myself a glass of wine and we chatting relaxed throughout the day. On bad days, either the man or I complain loudly about life, the universe, and all the rest, while the other hums in amusement and in the (mostly) right places ohoh or tssstsss makes. In addition there is a lot of dish clatter, which I surrendered very well (Couple Ritual Part 1).

After we have successfully completed the first stage of the evening (and the second glass of wine) one way or another , the man then goes shopping for dinner. Most of the time, he also brings along food that was not on the list (party puffs from Fisch-Fasch?!, Cider from blueberries ?!). The shopping bags are like big surprise bags for frolleins who get things that I would never have bought myself. By the way, the silent agreement provides for the man to put down the full shopping bags on the kitchen floor in front of the dishwasher, while I am responsible for storing in the refrigerator. However, the man likes to present particularly interesting pieces of his hunt himself (Couple Ritual Part 2). So recently he pulled a huge blue pack of ornate characters from the depths of a bag. "Here," he said. "Did I bring: Matzos."

What can I say: hit, sunk. I always wanted to make Matzo Ball Soup - or in German - matzo dumpling soup. On American blogs, I've read so often about the typical Jewish dish for Passover (Passover). The dumplings are made from matzo flour or ground matzot breads. The huge cracker-like Matzót breads consist only of flour and water. Almost taste-neutral and only flavored by roasting, they are meant to evoke the Jewish exodus from Egypt and liberation from slavery. According to legend, during the desert flight people could only bake unleavened bread. The consumption of Kosher Matzót and Matzo Ball Soup is one of the most important Jewish festivals every year. Anyway, at least in New York, the soup seems to be very hip, omnipresent and at least as good as penicillin against the flu. 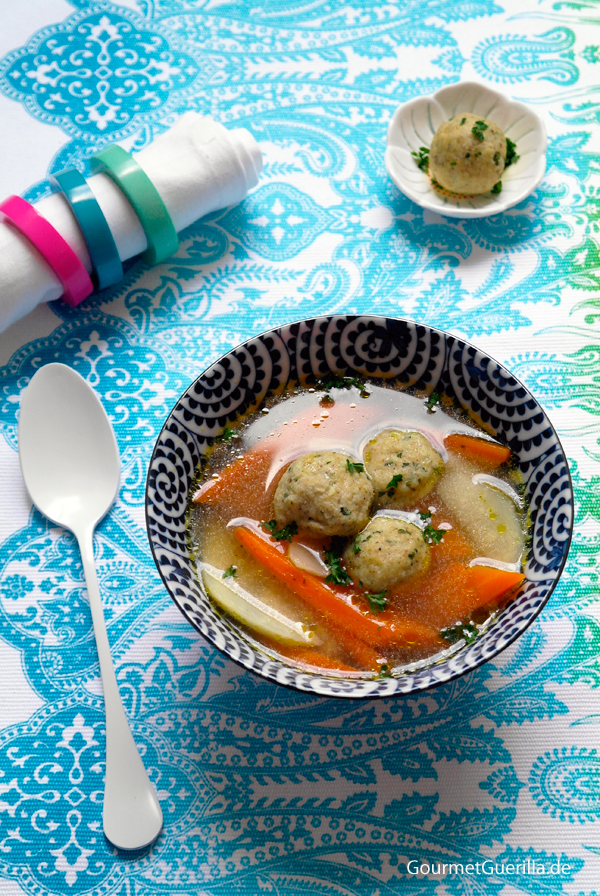 But where does the average German consumer get such extravagant concoctions as matzo or matzot bread?Or from the crispbread rack in well-stocked other supermarkets. So I set to work this weekend on the recipe, shredded matzot breads in my lightning hacker, mixed the matzot flour with egg, oil, pepper and some water and tossed small dumplings and some vegetables in simmering chicken broth.

The result: On very gentle, harmonious and tasty soup, in which all the ingredients come to their own. The dumplings are similar to semolina dumplings on, but remind in their consistency rather to Markklößchen. In terms of taste, the matzo dumplings are hearty and take on the aroma of the broth very well. A perfect savory variation for vegetarians: marrow balls without meat (then preferably cooked in vegetable broth).

Man and child were (naturally) a bit skeptical and then totally thrilled. Matzo Ball Soup is now also totally hip with us. And couple rituals anyway.

And so it goes for 3 people (cooked in a not kosher kitchen):

2 Matzót bread finely chopped in a lightning chopper until a flour is formed. 2 eggs with 2 tablespoons oil , 2 tablespoons mineral water , 1 pinch salt & pepper and possibly 2 tablespoons of chopped parsley good. Stir in the Matzót flour and let stand for a few minutes.

Bring 2 liters of light chicken broth (vegetarians take vegetable broth) in a large saucepan to a boil. 3 large carrots and 3-4 celery stalks or 1/4 cumin celery Peel and cut into larger pieces. Switch back the heat of the broth so that it just simmers and then put the vegetables in the pot. 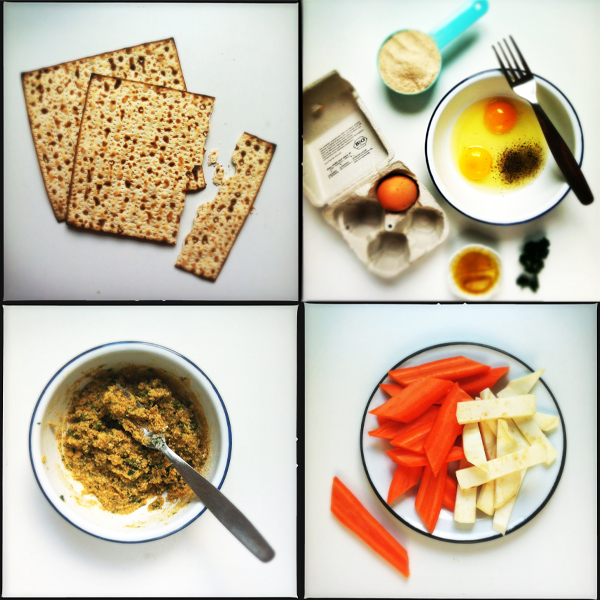 Mix the Matzót mixture once more, make walnut-sized dumplings with moistened hands and let them slide into the broth.

20 - 30 Simmer minutes on low heat. The dumplings are ready when you have increased their volume and swim on the surface. You can also let them soak in the broth without any problem - then they absorb more of the spicy liquid and eventually sink to the ground again.

Sprinkle in soup bowls and sprinkle with parsley.

Tip: In case of a cold spice up the broth with an extra pinch of black pepper. 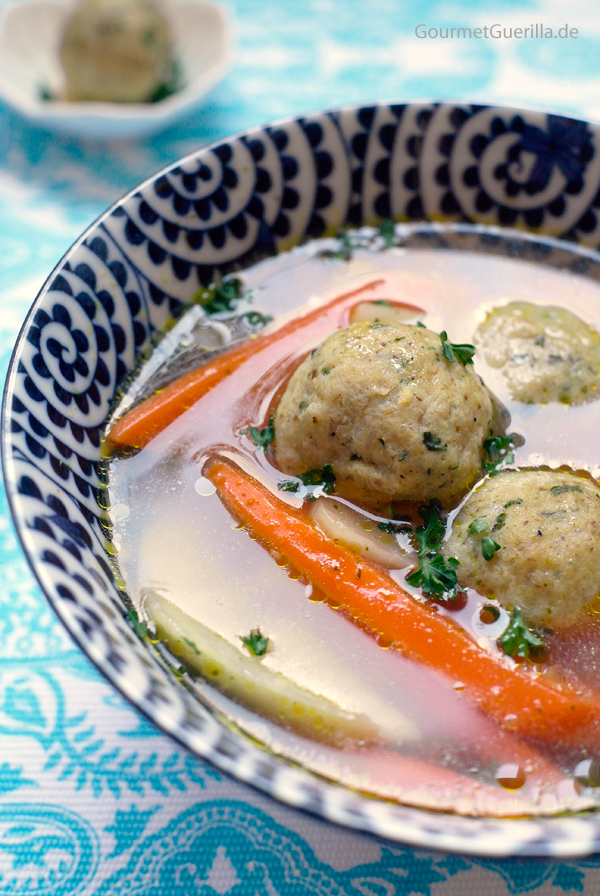 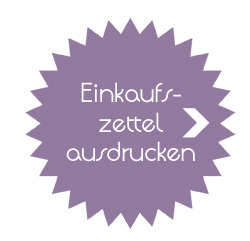